The way we are presenting data in Years 7, 8 and 9 has changed since last year. From this academic year, we have started to report Year 7, 8 and 9 students’ assessment results as percentage scores, in their progress reports.

Because we want to report something easy to understand, as well as something which is more meaningful, we now report the average percentage scores that Year 7, 8 and 9 students achieve in their class assessments.

Students are assessed at least once per term in each subject, enabling a percentage score to be reported for each subject, in every progress report. The progress report includes a ‘Current score’ column and a ‘Key Stage Three Progress’ column. The first column will tell you what percentage your child achieved in their assessment. This second column will confirm whether the student’s score is:

The progress of students is not measured against a ‘target’ percentage score, set in September. Instead, student progress is measured by comparing each student’s individual percentage score to the average score of a group of students. These groups (of approximately 20-30 students) will be different to the classes that students are taught in. Instead, they are based on the students Year 6 SATS results (so students with similar results/ starting points are grouped together).

If the student’s current percentage score is neither significantly above nor below their group’s average score, their score is reported as being ‘On target’, as they are working approximately at the average level of their peers.

Conversely, if the student’s current percentage score is below their group’s average score, the student’s progress is reported as being ‘Working towards target’, (or ‘Cause for concern’ if the difference is great enough). This means that the student is working significantly below the average level of their peers.

The significance of the difference between a student’s percentage score and the expected / average score for their group, is determined using standard deviation. 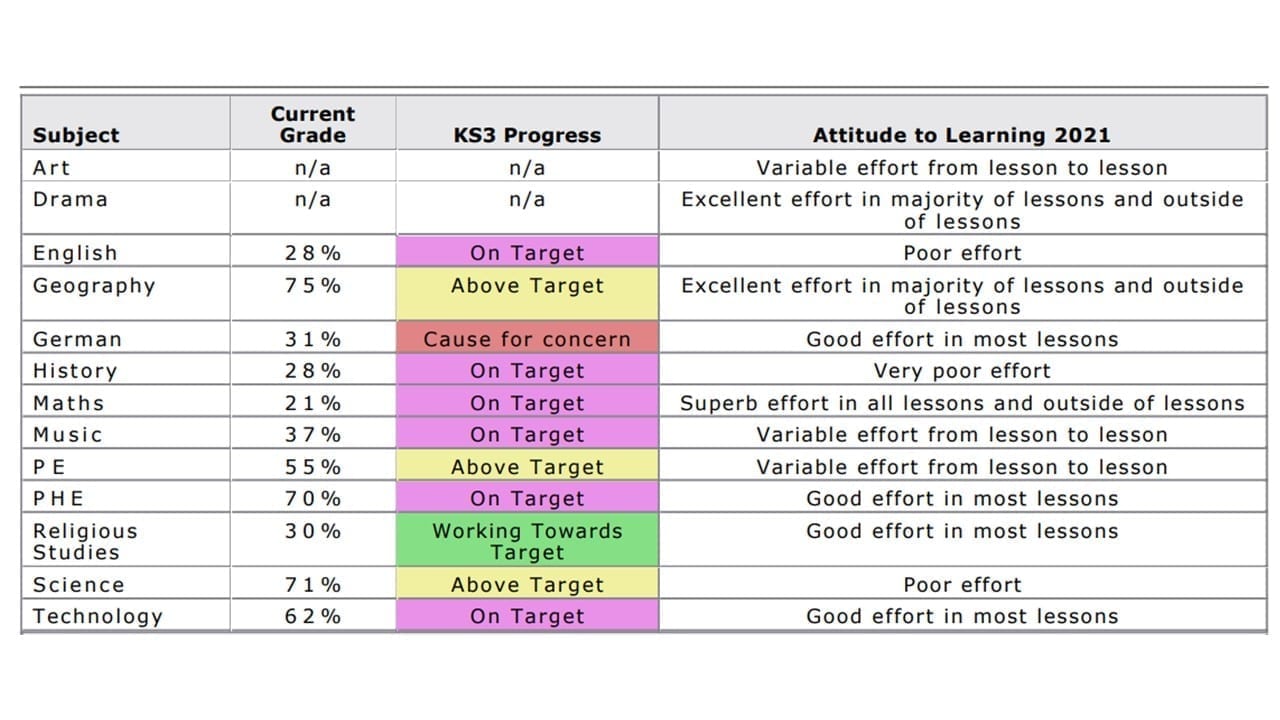 Please note, percentage scores achieved in different subjects are not comparable and a seemingly low percentage score does not mean that your child is not performing well, it instead reflects the difficulty and rigour of the subject’s assessments.

An important reason why Iceni Academy decided not to use percentage score ‘targets’ with Years 7 to 9, is that we do not want to create artificial barriers or ceilings for the progress of our students. Many teachers have observed that younger students who meet their expected grades early in the school year, begin to ‘switch off’ and become more difficult to motivate as the year progresses. This means that they will have made less progress by the end of the school year, than if they had not had an expected grade. Similarly, some younger students have become very demotivated when they have failed to meet a very challenging expected grade in the autumn term and do not make the progress they are capable of by the end of the year either.

Without percentage score ‘targets’, we believe that students will be motivated to do their best in every assessment and make the progress they are truly capable of.

From Year 10, when students begin their GCSE subjects, they will be given end of Key Stage targets in the form of a GCSE 9-1 grade. This reflects the fact that they will be working on GCSE-level courses for the remainder of their time at Iceni Academy.

At Iceni Academy we set aspirational targets based on the point at which students start with us (the Key Stage Two data).  We also use other information such as CATs tests which, sometimes, allow us a great picture of the “whole child” as an individual.  In some cases we also do some subject based testing to ensure that students get a target that is challenging but not unrealistic.

Students are informed of their target grades at the start of Year 10, and receive grades for their assessments against the GCSE 9-1 framework.

At Key Stage 4, we also report predicted grades for the end of the Key Stage, based on students’ assessment results and teacher’s professional judgement of the progress students are making.

We report our students’ progress three times a year to their parents/ carers but live access to achievement, behaviour and attendance data is also possible via Go4Schools. Please contact reception to find out more. Parents and carers are also encouraged to contact their child’s Personalised Learning Tutor, subject teacher or Director of Faculty in the first instance to help support your child’s learning.

You can find out more about which cookies we are using or switch them off in settings.

This website uses cookies so that we can provide you with the best user experience possible. Cookie information is stored in your browser and performs functions such as recognising you when you return to our website and helping our team to understand which sections of the website you find most interesting and useful.

Strictly Necessary Cookie should be enabled at all times so that we can save your preferences for cookie settings.

If you disable this cookie, we will not be able to save your preferences. This means that every time you visit this website you will need to enable or disable cookies again.

This website uses Google Analytics to collect anonymous information such as the number of visitors to the site, and the most popular pages.

Please enable Strictly Necessary Cookies first so that we can save your preferences!